skip to main | skip to sidebar

There's an excellent report by USA Today that uses EPA reported pollution data and air modeling to estimate air quality at schools nationwide. It has a good database-backed Web site, too, that lets you look up your school, the schools with the worst air quality from those sources in your state, and so on.

I was involved very tangentially in this project -- I helped to work on data for PERI that USA Today used. I'm impressed by what USA Today did with it; it's better than the usual environmental toxics story. What PERI did was a bit complicated to explain, but I'll make the attempt -- there's a database, TRI, in which large industrial sources report their toxic pollution. A project within EPA, RSEI, takes the reported pounds of air pollution from each facility and runs an air model to see where the chemicals are going, geographically. They can then use Census data to see how many people live in each area affected by the pollution. They add all of this up into an overall risk screening score for each facility. PERI realized that these data could be obtained for each location on the ground, instead of being all added up to a single score for each facility. That lets you find the contribution of each polluter to a particular place where people live. (Or, in this case, where a school is.)

I only wish that I had the resources that USA Today does; their database-backed Web site is significantly more polished and user-friendly than I can generally make mine in the time that I have available to work on them. Learning how to embed databases into Google Maps is something I'm going to have to pick up. But there is one map graphic they created that I particularly wanted to call attention to: this -- or as a screenshot rather than an interactive map, so that I can show it here, the map below. 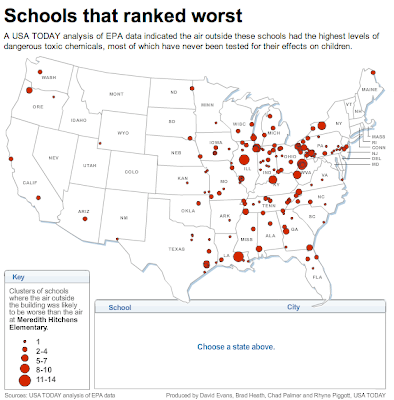 Compare this with the map of electric power generation by fuel source that I copied from eGRID for this earlier post. Or, for that matter, compare it with Joel Garreau's division of North America into "nine nations": 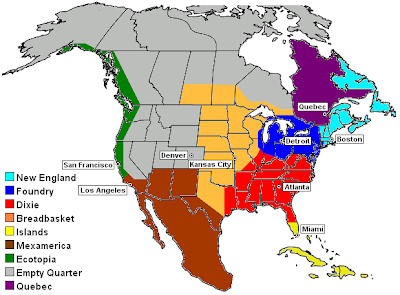 Industrial pollution near schools seems to be heavily concentrated in the areas of the country that Garreau refers to as Dixie and the Foundry. That's surprising, in some ways. Other places such as California certainly have industrial pollution too, but perhaps it's more spread out, or further away from city centers. Of course, this particular pollution map doesn't include non-point sources such as cars -- Los Angeles' smog problem gives it much worse overall air quality throughout its region than the vast majority of point-source-polluted sites. And this map doesn't include all sorts of other sources. But it's an example of how pollution is largely affected by regional patterns of development. If you were mapping environmental damage from mining waste, you'd get a different region of the U.S. highlighted -- national solutions to these problems often come down to regional politics.

Posted by Rich Puchalsky at 8:58 PM