skip to main | skip to sidebar

There's a Twitter hashtag / meme / whatever: "#theresistance". At first glance it appears, mostly, to be a vehicle for ex-GOP current Dem people like Frum and Brock to continue to try to keep influential positions by making the alternative to Trump be a neocon one, using the techniques of manufactured outrage that doesn't go anywhere that they learned in the GOP.

But there are some people with similar ideas who are well-meaning and sincere. For instance, here is an article by B Sales-Lee: Keep Calm and Protect Democracy. It has the characteristic combination of two assumptions (or, in this case, what are presented as the professional judgements of a historian): 1) we're close to fascism, or at least close to authoritarian martial law; 2) we best prevent this in the short term by being calm and not breaking the rules. Further characteristics not present in the Sales-Lee article are that the goal of this resistance to fascism is implicitly or explicitly to put things back to how they were, back to "functioning democracy" and "functioning government" and generally back to the neoliberal order as it was under Obama, either because this is good in itself or because it is a lesser evil way station on the way to better things.

I have my doubts about whether Trump is really going to lead us to authoritarian martial law or fascism or however you'd like to describe it. He's a very unpopular and in many ways standard GOP politician, promising to do many of the things that Reagan promised and could not do. As Corey Robin has been writing, it's quite conceivable that plain political opposition will stop him. #theopposition doesn't have the glamour of #theresistance, of course.

But let's say he is. People are then taking the position that fascism is fast approaching and that we'd better be polite about it. This I just don't understand. It only works if you can get everyone to be polite, but of course you can't, so it predictably ends up with liberals as the "peace police": enforcing their standard of behavior on others and finally turning them in to the police or not supporting them when arrested in order to save us from fascism. (B. Sales-Lee, I should note, isn't a liberal, but rather a pacifist socialist.)

I really don't have a problem with the center-left saying that Trump is a very bad GOP pol and that we have to oppose him through normal political methods. There are always some people playing the "inside game" in politics, and that's their role. But if that's really what they are going to do, they should stop presenting themselves as resisting imminent fascism, because they aren't. Or if they do really think there's imminent fascism, then they have to recognize that this will in most people's minds demand actions that they aren't comfortable with. I think that a lot of the lower-level #theresistance talk is from people who are realizing that the Democratic party will not do even ordinary political opposition, so they are trying to ramp up expectations rhetorically.

There is one thing, though -- actual resistance is dangerous. I don't see why anyone should do it if the goal is to, explicitly or implicitly, return to the neoliberal order. That same order created the conditions that made Trump possible as a political leader in the first place, and if we return to it, those conditions will return and we'll get a worse Trump. An actual resistance has to be based around shared values that would not lead to a return to that order. Until people in the center-left are ready to treat the left as serious interlocutors rather than as encumbrances on the way towards putting everything back as it was, those shared values are impossible to work out.

Tally of the day

3/4 of National Mall empty, in part due to checkpoint blockades 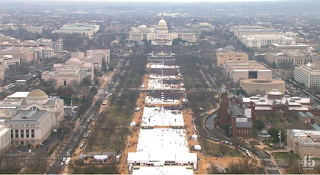 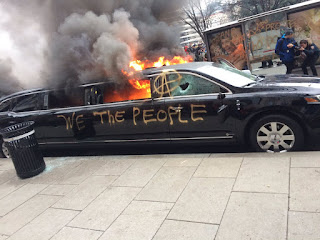 1 Nazi leader punched (didn't want to embed the GIF, you can find it easily enough) 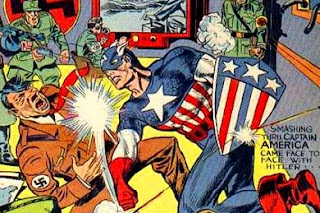 0 declarations of martial law
Posted by Rich Puchalsky at 12:15 PM